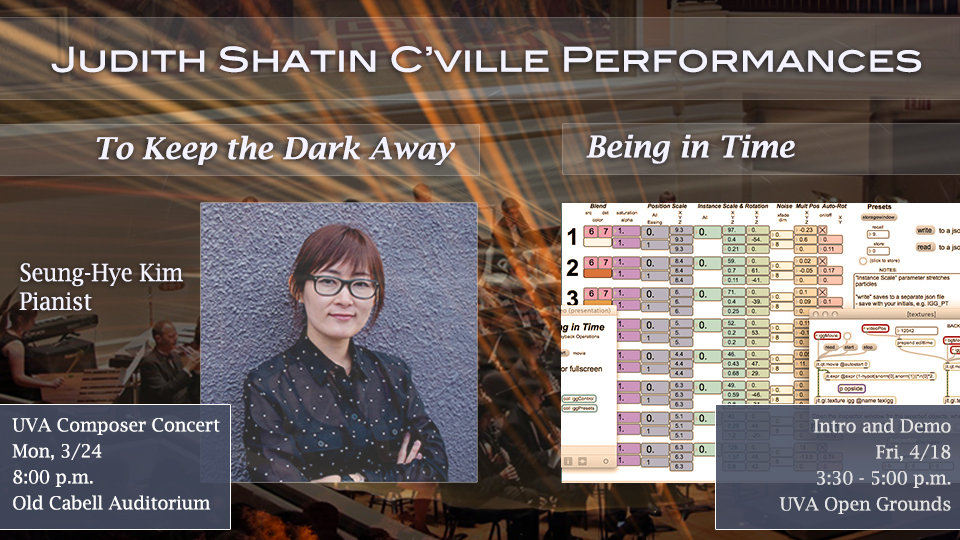 First up, on Monday, March 24, at 8:00 p.m. in Old Cabell Auditorium, pianist Seung-Hye Kim will perform a program of new piano music, featuring pieces composed at UVA. I’m delighted that she will perform the Charlottesville premiere of To Keep the Dark Away, inspired by the poetry of Emily Dickinson. We’ve already had a great rehearsal, and I’m looking forward to the entire program.

Second, on Friday, March 28, at 1:00 p.m. a Quad version of Tape Music will premiere at SEAMUS (Society for Electroacoustic Music in the US) at Wesleyan University in Crowell Hall. With sounds created from recordings of me messing with lots of different types of tape (masking, duct, packing you get the picture), there’s lots of rhythmic interplay, and commentary on what this material means, as well as a nostalgic nod to the ‘tape music’ genre.

Next, on Sunday, March 30, at 3:00 p.m. pianist Gayle Martin, for whom To Keep the Dark Away was commissioned, will perform it on her program at the Tenri Cultural Institute in NYC, where she is being presented by The Leschetizky Association. Her program also includes Venetian Mazes by Paul Alan Levi, as well as Schubert’s Impromptu in Ab and his ‘Wanderer’ Fantasy. Happily, I’ll be in town, so come on down!

And then, Being in Time is about to come into being as a complete project! The team, and especially Joe Adkins, Paul Turowski and I, have been hard at work on the video element. Once I started thinking of Being in Time, Being in Place also became more and more important. Joe and I have worked with astronomy grad student Rachel Beaton’s photographs of Charlottesville’s sky and surroundings, with elements of the blue ridge peaking through. And Paul has worked with Joe and me on the complex interactive video program using Max-MSP Jitter. It has certainly made us all jittery at times, trying to create a visual trajectory that amplifies and comments on the musical one. Rehearsals are also on the move, though four snow days have set us back a bit.

So, come hear an introduction to the piece, and try out the conductor-controlled electronics at Open Grounds on the Corner at UVA, on Friday, 4/18, 3:30 – 5:00 p.m.. The premiere has been postponed ’til the fall of 2014 due to the unprecedented number of snow days and resultant missed rehearsals! Meanwhile, my thanks to everyone involved in the project: our entire team, and of course, the members of the ensemble, who have indulged our multiple tests of the various systems, and are giving their utmost to make this music come to life!